The Christmas elf is an adored fictional character that many of us have come to know and love during the busy holiday seasons. They are known as Santa's helpers, gift producers, and cute little pointy eared friends. It is believed that they live at the North Pole with Santa in quaint nicely decorated cottages with Christmas lights all year-round. But, what are elves up to the rest of the year? Who is the Christmas elf? How can you become an elf?

Elves are not only busy during November and December. There are plenty of other events or reasons to get dressed up and put on a smile. Some like to star in plays. Others dress up for an acting role. Movies that air in December need to be filmed far in advance. So don't be surprised if you spot a Christmas elf in the summer getting ready for his or her big gig.

There's been many movies created that include one or more Christmas elves. Some movies worth watching include: Elf, The Santa Clause (1,2, & 3), Santa's Workshop, and Arthur Christmas. Of course, there are several other movies that include a depiction of the fictional elf life.

​Acting like an elf is pretty simple. Typically elves are known to be extra jolly. We could all try to add more happiness into our every day life. Elves are known to keep busy, because well who's gonna make all the presents for the little ones, right? So, stay on your toes and keep moving!

Having the correct attire as an elf is very important for the role. You want others to know who you are and with our elf costumes you are sure to show off. The signature elf look is typically someone of short stature but not to worry because tall elves are needed as well. It also includes pointy ears, rosy cheeks, pointy hat & shoes as well. Typically elves are dressed in red, green, or a combination of both. Gender is not specific when it comes to being an elf and wearing the costumes.

Where To Buy Elf Costume

​No need to look further for your perfect elf costume. We have several varieties available that are one size fits most. Buy one or several to enjoy a selection you can choose from whenever you may need to get into character.

Feel free to browse our elf costumes in order to find the best look for you! 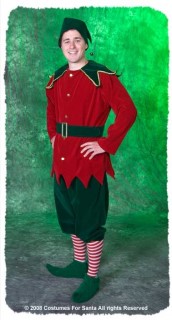