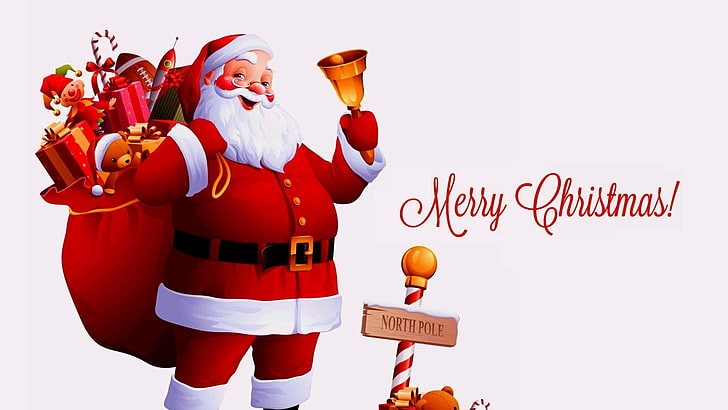 ​Christmas is arriving very soon! The trees are assembled, the festive lights are hung, and the presents are wrapped. But, what do we truly know about Christmas? Of course we all know that it's a time of year to be grateful and giving. We appreciate our families and show it by gifting them with their most desired presents. We gather around and enjoy one another's company while exclaiming excitement for every cherished gift received. Here is a list of fun Christmas facts that many people are unaware of.

1) Christmas Was Once Illegal

​From 1647 to 1681 Christmas was declared illegal by the Puritans. The Puritans detested activities associated with the holiday such as dressing in costumes or performing in the streets. Groups of young men called wassailers would demand food and gifts in exchange for their songs and good wishes. So when the Puritans rebelled against King Charles I, Christmas was abolished.

The ban was finally revoked in 1681 by the English governor, Edmund Andros, but it wasn't until the mid-19th century before celebrating Christmas became fashionable again in the Boston region. 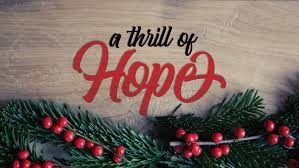 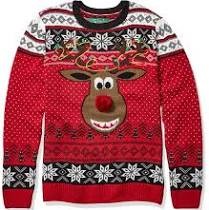 ​Holiday sweaters have become more and more popular over the years. Many workplaces put together contests for who can show up in their ugliest Christmas sweater. Usually there's a prize involved, but no matter what, the winner is always awarded with sweet bragging rights. That is if you really want to talk about the entire weekend you spent finding the ugliest thing you've ever dared wearing, only to wear it just once.

Every year millions are spent on these sweaters so there must be some fun to being silly through the holiday season by purchasing one and wearing it out in public. Hey, at least you bring a smile to others during a stressful time of year. 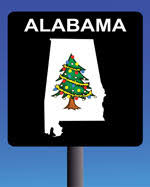 ​It took some time for states to come around to the idea of recognizing Christmas as a legal holiday. The first state to do so was Alabama back in 1836. So, if you really enjoy having the day off from work, then take a moment to thank those who once incorporated and made the laws of Alabama state.

Gradually other states decided to follow along with Alabama's lead. But, it still took quite a while for all states to agree that Christmas should be a legal holiday. In fact, Oklahoma was the last state to approve and recognize the holiday, but they waited until 1907. That's 71 years difference! 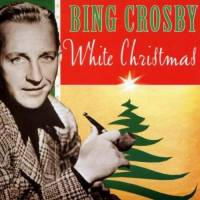 When you think Christmas, it's hard not to think of snow and the song White Christmas. Did you know that Bing Crosby wasn't the only singer of the song? Many others have tried their hand at singing it but the version sang by Mr. Crosby is the World's best selling single.

The estimated sales of the single White Christmas surpass 50 million copies! The release date was in 1942 written by Irving Berlin and it still holds that title today. 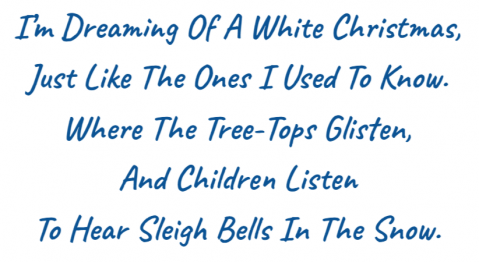 ​When we think of greeting cards, our minds automatically go to Hallmark. No surprise because they have shaped a lot of our history with their sentiments. If someone falls ill, then we send them a Hallmark. If it's the celebration of a birth or another birthday, then we send another Hallmark. Same goes for Christmas.

Christmas has been known for gift giving, and letting others know how much they mean to us. What better way then by sending a Christmas Hallmark card? Well, that's the same thing Hallmark thought about back in 1915 when they introduced the idea. 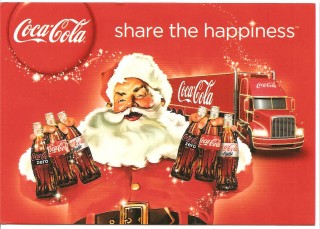 ​All the Santas around the World have Coca-Cola to thank for many reasons. Santa Claus was once depicted as a grumpy person. Coca-Cola decided to use Santa in many advertising campaigns. While doing so, they showcased an extremely jolly and likeable character.

Prior to the advertisements of Coca-Cola, Santa had no real set look. He wasn't really known to have any specific features. He quickly became transformed, thanks to coke, into a man known for his charming smile on his face and rosy red cheeks with a full beard below.

So, share a coke and spread some cheer this holiday season! 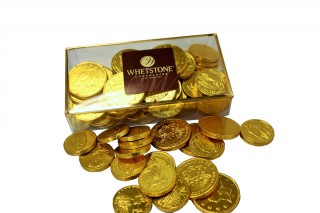 St. Nicholas served as an inspiration for Santa Claus. On December 6th, St. Nicholas Day, each year children would leave their shoes out in hopes that he would leave them coins, food, or gifts. Mostly he would drop gold coins in the shoes left outdoors.

Now, many chocolate companies create a product to mimic the coins that were once given. Their gold wrapped coins look like the coins in the past. Usually it was poor children that really could use the money. Now kids just want more chocolate! 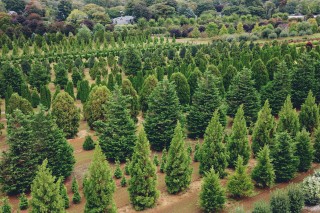 ​Growing a Christmas pine tree can take as long as 15 years, or as little as 4 years. The average length of time is 7 years to get the tree to the typical height of 6-7 feet.

Approximately 25-30 million real Christmas trees are sold per year in the U.S. alone.

Trees are grown in all 50 states including Canada as well.

For every Christmas tree that gets harvested, 1 to 3 seedlings get planted in the following spring. 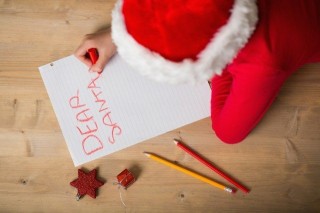 If you have children that want to mail a letter or Christmas gift list, then send it to Canada. It's a really fun way to get in the spirit and let the kids write a specialized letter. It's keeps the little ones busy for a while, plus it's a great way to gather a list from them without directly asking yourself. 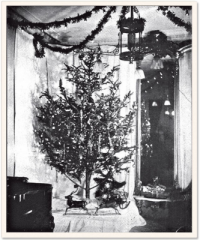 ​Prior to the invention of string lights, candles were used to illuminate Christmas trees. As you can only imagine, this proved to be very dangerous. Lucky for those that could afford another option, string lights were created. In 1879 Edison designed the first set of string lights. He didn't make them for Christmas trees though. He was trying to bid on a contract that would allow him to power all of Manhattan with electricity.

It wasn't until 1882 until Edward H. Johnson, also known as "Father of the Electric Christmas Tree", had the idea to use string lights to decorate his Christmas tree. His idea didn't really take off until President Grover Cleveland requested an elaborate Christmas light display to please his daughters in 1895.

From then on, the lights were sold in strands but it was only attainable for the wealthy due to the high price tag. It wasn't until 1919 before the string lights became more affordable for all and then they really became wildly popular. 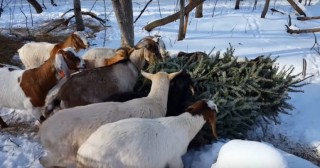 ​If you are looking for a good way to repurpose your Christmas tree, then consider feeding it to animals! Some zoos accept them after the holidays. Elephants really enjoy playing with them but the nutrients are a terrific supplement to their diet. But, for those that don't live near a zoo, try contacting a local farm.

During the winter, goats cannot graze as easily on greenery. They require other feeding options. Christmas trees are great for their diets and will be gladly accepted from farmers as free feed. Goats get extremely excited when they have the opportunity to eat a Christmas tree and will usually devour it in a matter of minutes!

Pine needle are heavy in vitamin C which make for a terrific natural de-wormer in animals as well. Lions, pigs, elephants, goats, and kangaroos all love the tasty winter treat! In fact, kangaroos only like to play with the branches, but who doesn't love a new toy during this time of year! 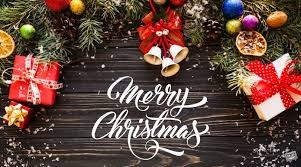